Learning became one of my hobbies only after I had left school and was no longer educated by teachers.
In my high school days, those educators killed all my joy of learning, so that only with the arrival of a computer, i.e. a COMMODORE 64 was my enthusiasm for self-directed learning sparked once again and has hitherto not come to an end.
From this point of view, teaching webdesign made a lot of sense as this is certainly the most volatile and rapidly growing field - compared to any other school subject.

I gave up political work some 40 years ago, after I had been the speaker of all the secondary schools in Duisburg, Germany. At that time (1967) I was praised by the press because I believed in the power of peaceful demonstrations and similar actions and happenings against political grievances, while others were already throwing stones. Later at Hamburg University, I returned to politics as a member of a student association and author of numerous political satires published under the pseudonym Erna Meier (the name of my cat at the time).

Music has always been a hobby of mine. It started with playing the recorder and at the age of 12 the cello, as our school orchestra was one cellist short. But my little sister's guitar became much more interesting when the Beatles conquered the world. In 1966, a Framus from a pawn shop came into my possession, but I mostly played folk on a Spanish classical guitar. 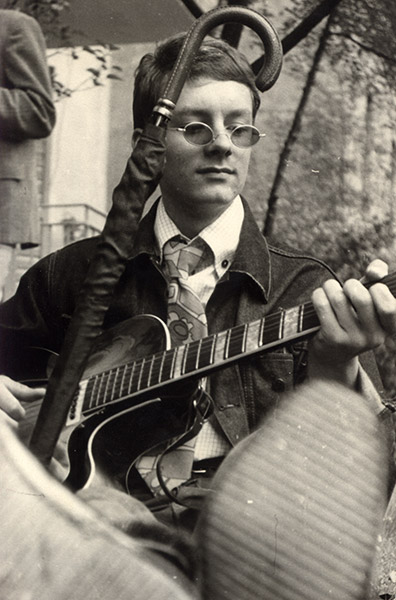 In the 60s, a guitar teacher was better paid than a private tutor and you could impress girls far better playing the guitar than the cello. But working as a DJ in the late 60s also helped.

At some point I hung all the guitars and a guitar banjo on the wall and for many years they collected only dust. 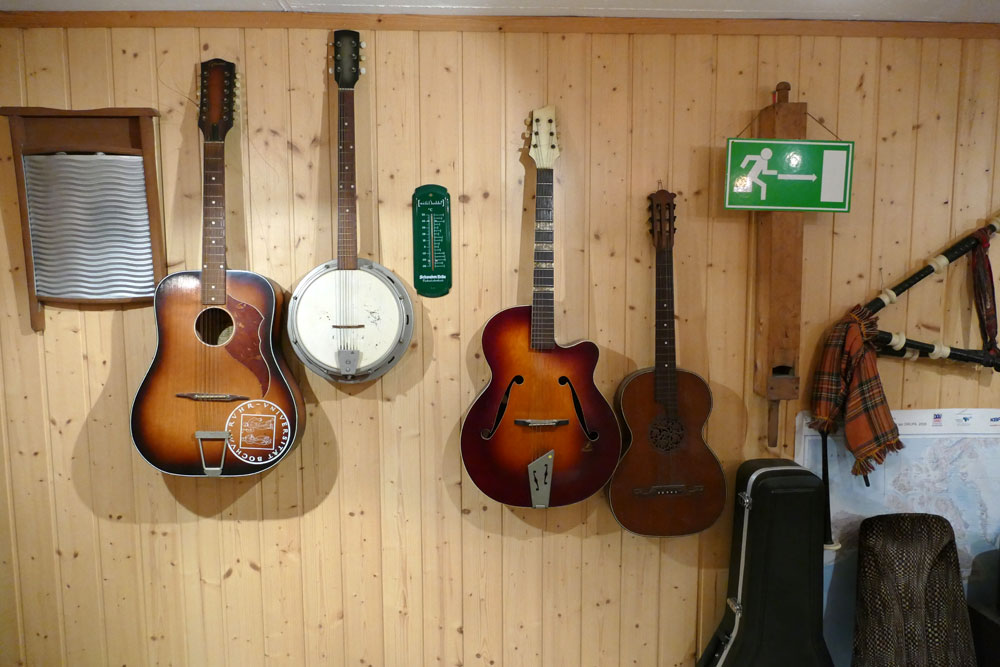 Nowadays, I only write a song every now and then directly into the computer or with the help of a keyboard.
After a pause of more than 30 years, during which my guitars stayed on the wall and were only tuned from time to time, I was inspired by a dear colleague from Aachen to take up playing the guitar again, and so I added a Stratocaster and a Les Paul also amplifier and a new concert guitar to my collection. 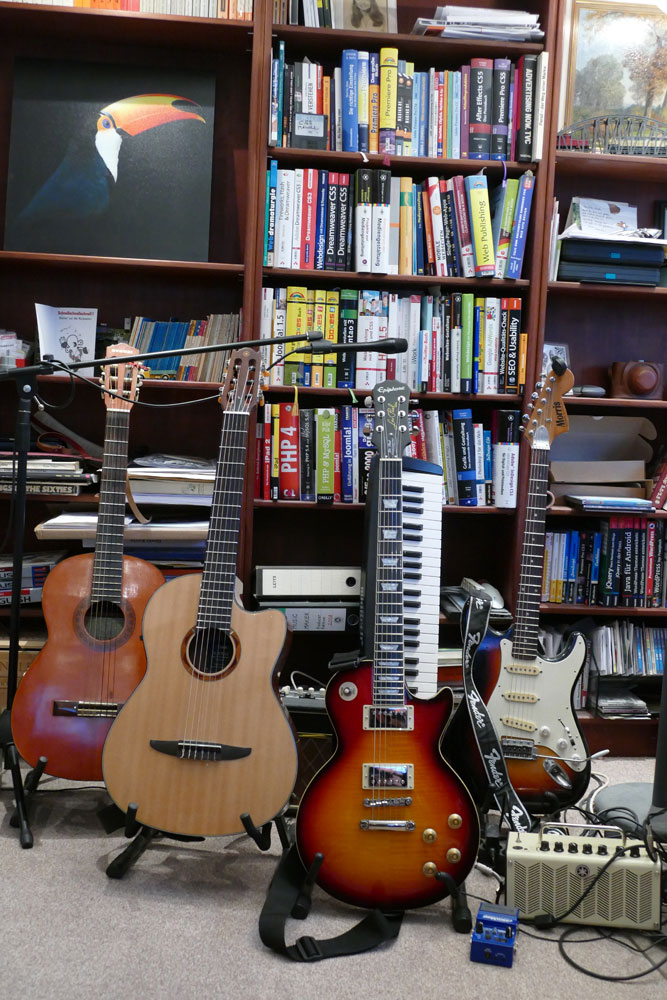 Not much going on

When I was 8 years old, I was told to take up equestrian vaulting to cure my back complaints and hence I learnt to do gymnastics on a galloping horse. When I turned 12, I took to the water, became a member of the local swimming club and played handball as goalkeeper in another club.

With a looming interest in girls, I left the water for the dance floor, assisted the dance instructor on a regular base and took part in dancing contests.
I spent four weeks in Baad, Kleinwalsertal, Austria, learning to ski, both cross-country and downhill, and mountain rescue service and took part in an actual avalanche rescue operation.

The years I spent living in Bochum and studying at the "Ruhr University", I gave up on sports completely until I moved on to Hamburg.

Squash made it from US prisons to Germany and I was fascinated by this fast type of sport instantaniously, started playing squash and consequently took up tennis as well. Being a pretty good skier and a teacher trainee, I was given the opportunity of taking part in skiing excursions to the Alps as a skiing instructor to Hamburg university students.

Having passed my first state examine as a teacher, I celebrated at the Mar Menor in Southern Spain taking part in windsufing classes. I enjoyed this so much that windsurfing and tennis stayed my favourite sports for the rest of my years in Hamburg and later in London.

At the ripe old age of 34, I was talked into playing indoor football [soccer to you in California] with my colleagues, so once a week we met at the school's gymnasium for two hours only to go to our local pub afterwards for a refill.

Los Angeles killed all sports activities although USC offered a lot. However, the tennis courts were either too hot for a Brit or the smog was too thick to enjoy running about. On the other hand (or side of town), the pacific ocean invited the real sufers but was no challenge an almost 40-year-old should face for the first time. But meeting other motorcyclists and joining the BMW Club of Southern California we enjoyed long weeksends riding to Yosemite Park, to Utah and Las Vegas, to Death Valley, Palm Springs or Phoenix.

A sauna bath and lying on a massage bench now seem to me just more according to age! 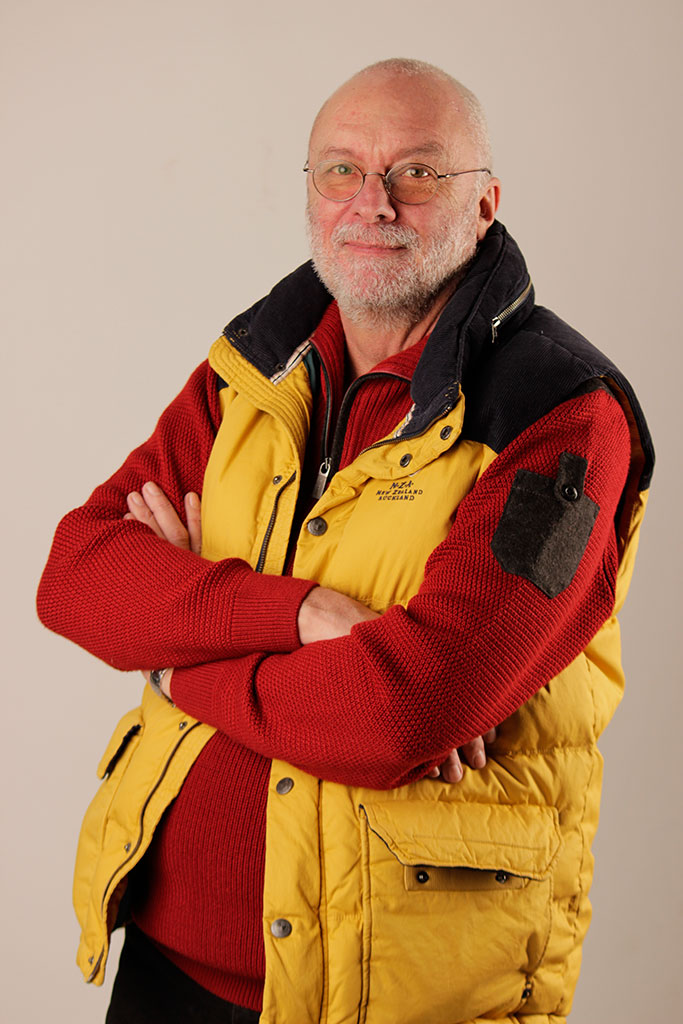 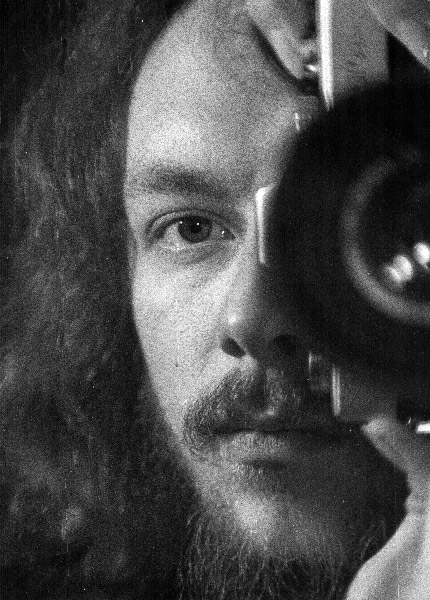 Successful participation in photography competitions in the early 1960s and the desire to become a filmmaker as well as the fact that I did not have the money to attend a first class film academy made me study theater sciences and photographic arts at the Ruhr-University Bochum and finally lead to videofilm making.

In Hollywood I worked as a film critic for a New York based Austrian cultural magazine. I enjoyed directing classes with Maximilian Schell at the Max Kade Institute, L.A., and the friendship with Bernd Capra, the director of the brilliant film "Mindwalk".

These experiences were a valuable basis for my audiovisional design classes lateron. 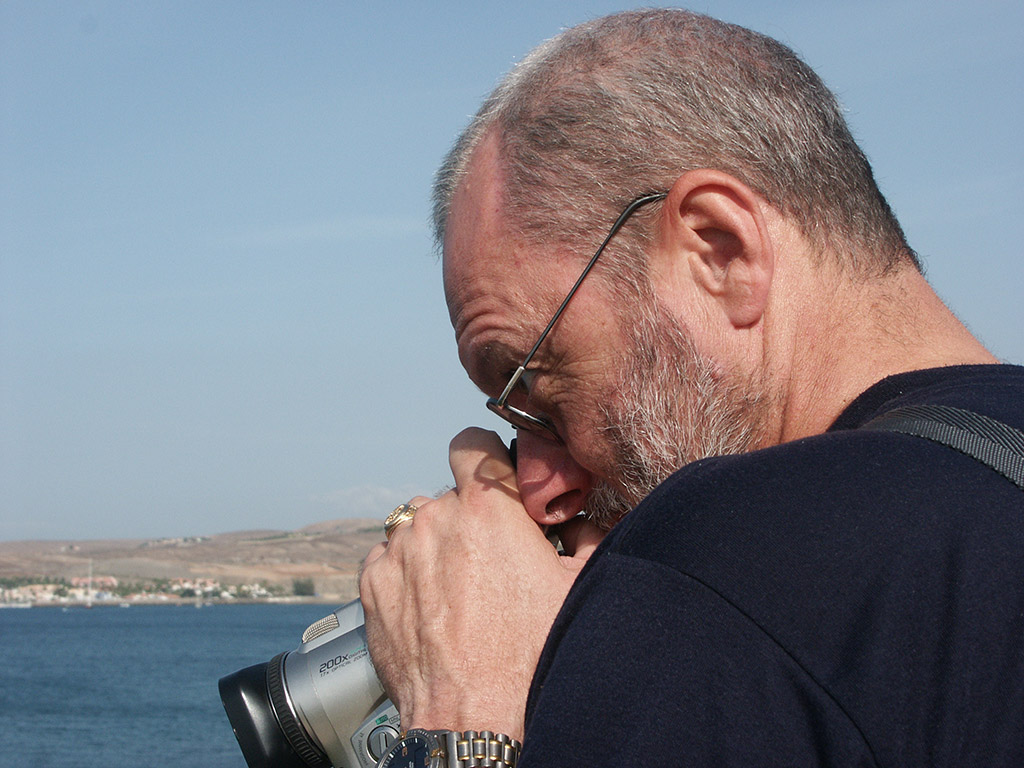 When I turned 16 and could have gone for my motorcycle license, I didn't even have the idea because I was totally concentrated on driving a car one day. At the age of 18, I got my driving license after only three driving lessons and ever since have been an enthusiastic motorists. My first car was a FORD 12M P4 with column gear change and bench in the front. It was hit by a drunken driver on my 19th birthday and hence had to scrapped. A couple of VW Beetles followed, privately bought for 100 Deutschmarks or at public auctions. My first car bought brand new was a little yellow FIAT 850.

My favourite cars in the 70s were a RENAULT R16 which took me to Austria where I met the love of my life, and a VW 411 VARIANT which did only 9 MPG due to a faulty electronic injection systeme.

My wife, who herself had traveled about New Delhi and Caracas on mopeds, got me on my first bike in the 80's, the best means of transport in mega cities like London and Los Angeles.
In order to take the driving tests in London, I got myself a SUZUKI GT125 but once I had the full licence, I bought a KAWASAKI GT 750 which took us all over England and even down to Austria. When I learnt that we got transferred to Los Angeles, I started looking for a bike that I could get serviced all over the world only to find out that there are but two brands. One company was BMW and hence I first got a BMW K 100LT, then a BMW K 1100LT and finally a BMW K 1200LT.

Anyone who has ever taken the Pacific Highway from San Diego up past San Fransisco, Seattle and Vancouver by bike, who explored Death Valley, Yosemite Park, Arches National Park in Utah, Gran Canyon or Yellowstone National Park on two wheels will surely never lose his fascination for motorcycles.

With the Eifel at our door, the big beemer will still not be mothballed for a long time. 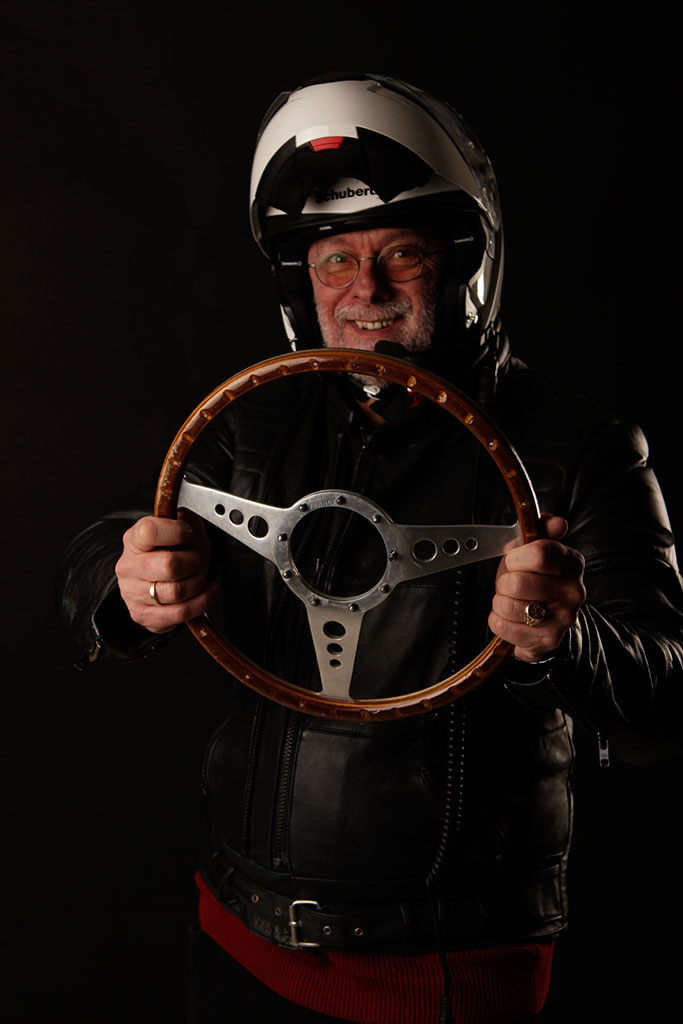 As a child I had the obligatory hamster, an aquarium for exotic freshwater fish and many hours of horse riding, but never owned a horse.

Freund (Friend) was the name of my Alsatian in Hamburg. I found him as a very young puppy in the local animal shelter. When he was trained, he was able to follow across the city without leash, use the underground and suburban trains or stay behind in the open convertible, which had the great side effect that no traffic warden dared stick a ticket to the windshield.
Since Freund was a knowledgeable city dweller and knew exactly that he had to sit down at every curb and had to wait for a finger sign before he was allowed to cross the road, chattering flat mates once "forgot" him at a zebra crossing. When, after ten or fifteen minutes, they finally came back to look for him, he had settled down peacefully. 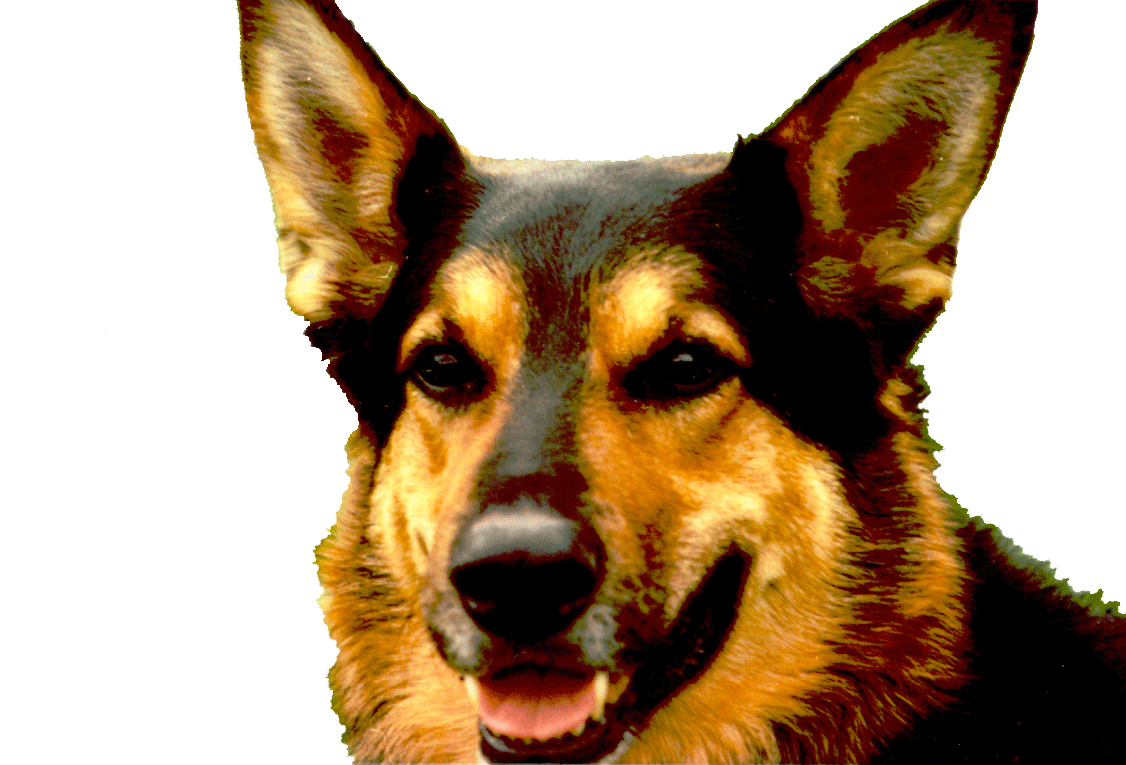 Freund lived in harmony with Bonnie and Erna Meier, two tabby cats. Bonnie had already moved into our residential community before Freund, so she stayed the one in charge. However, she must have been tremendously impressed by Freund's obedience, for she too came running doglike when she was called.
Erna Meier, on the other hand, had been rescued from neglect and never attained the primal trust that Bonnie and Freund shared. Her name, however, served as a psyeudonym for my political satires. 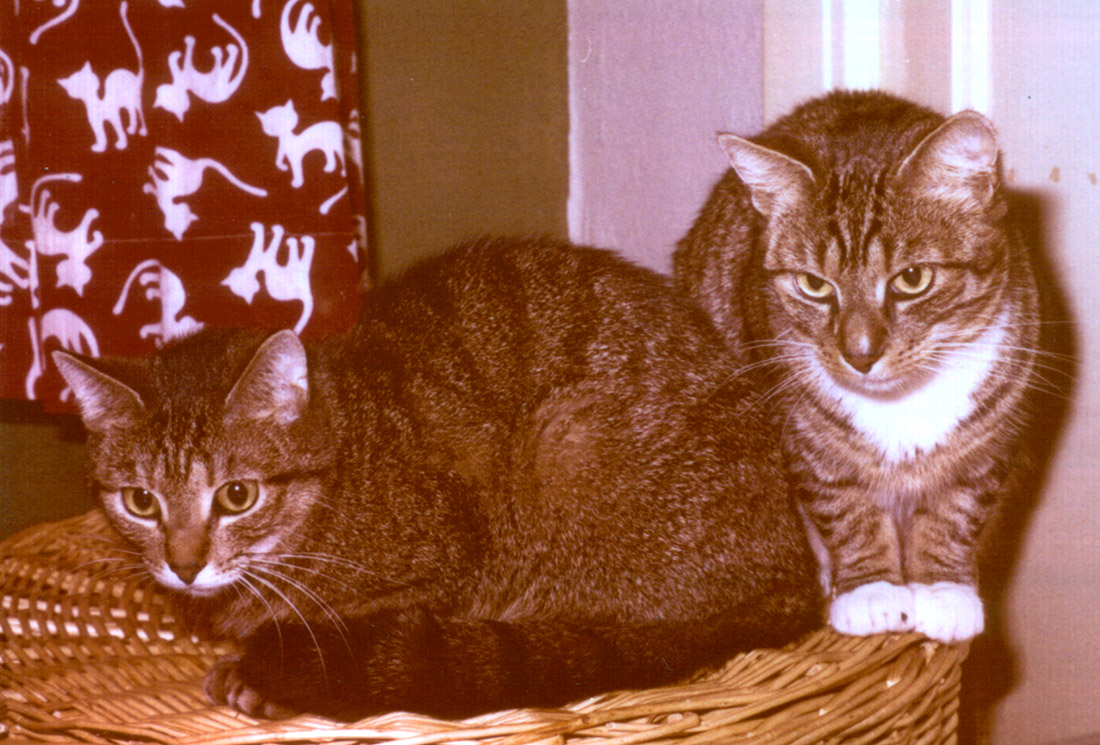 Sam Wurm was a Ball Python. Since I had always been interested in reptiles, I joyfully discovered that my students in Los Angeles either kept snakes or spiders as pets, since birds, dogs or cats were mostly forbidden by their landlords. Sam was the short form for Samantha / Samuel, since it took us two years to find out which sex he was. Unfortunately, Geman Lufthansa left him standing outside the airfield of Frankfurt Airport one night in early January, (although his retainer was marked "live animals"): Sam froze to death. 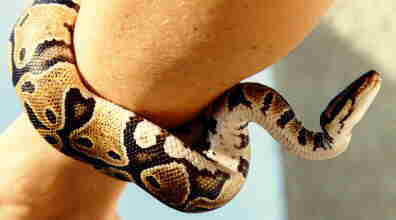 Cando von der Jonasburg, our Hovawart, still has his own website.
Here you find lots of information about his time with us. 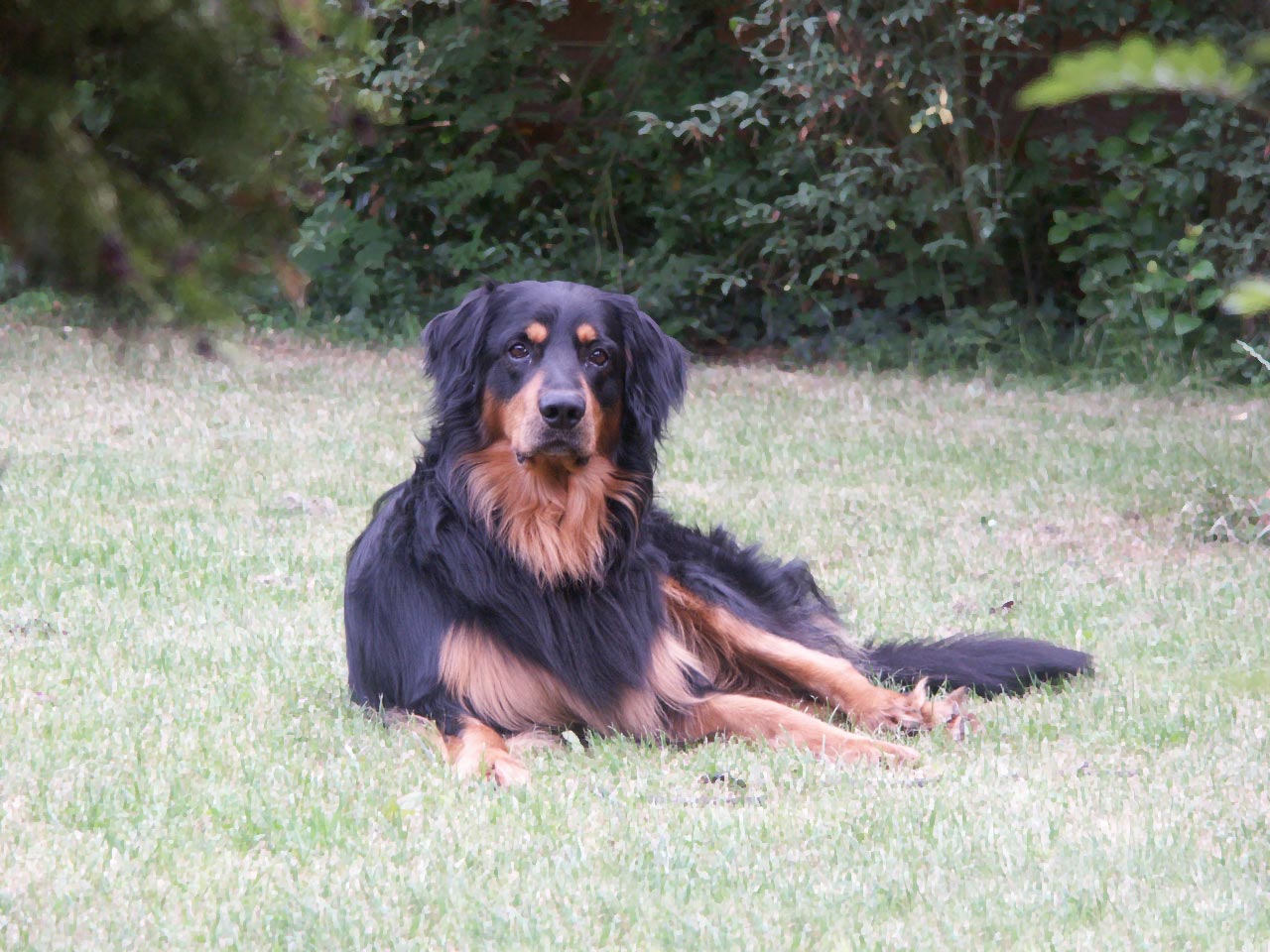 The next canine member of our family was Anton vom Fusse des Westerwaldes; he may well have been the first Canine Blogger worldwide. Since his website [bernersenner.de] recalls the days of his life from 2005 to 2013 in great detail, this will be all I have to say here about a most wonderful dog. 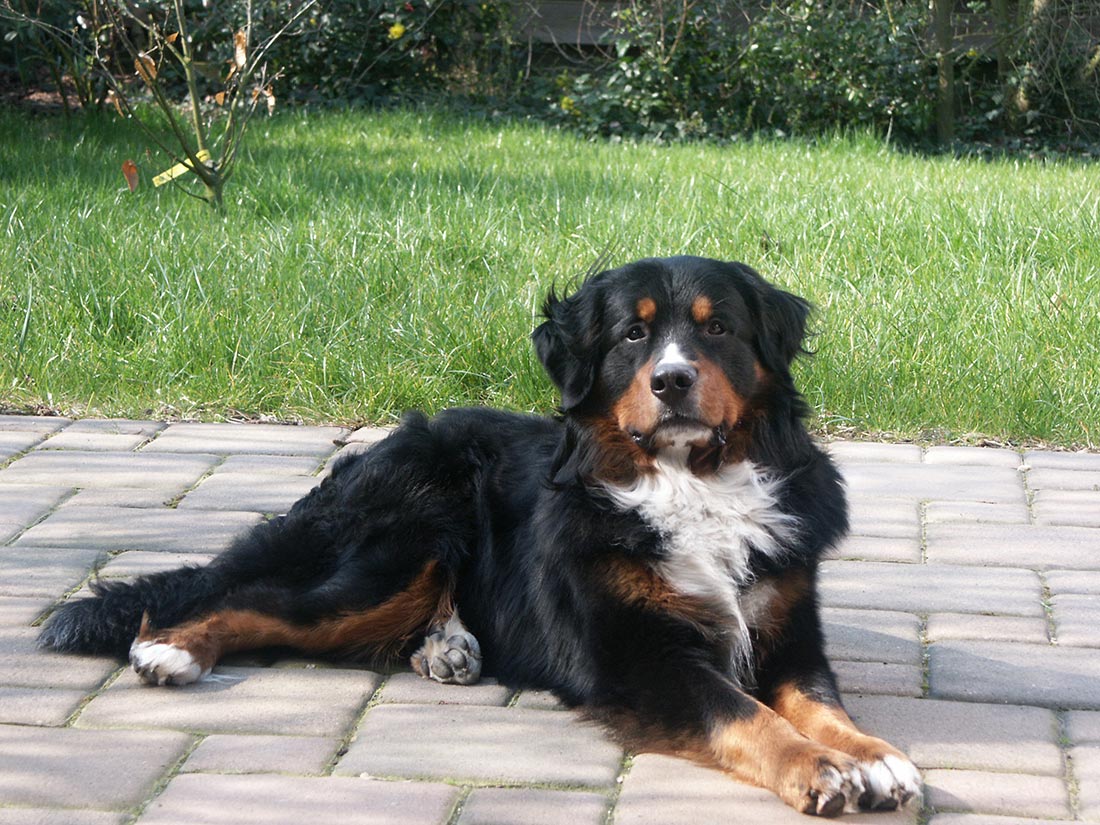 Rudi is the nickname of our latest addition to the family. His full name is Ludwig aus der Soester Börde and he will also enjoy his own website [rudi.gesti-design.com]. 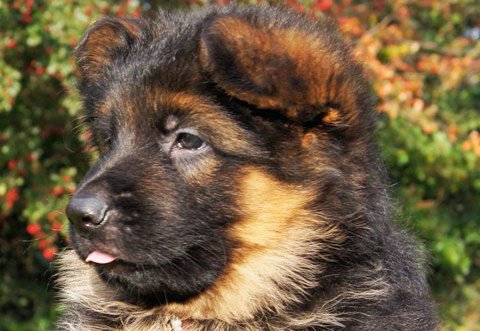